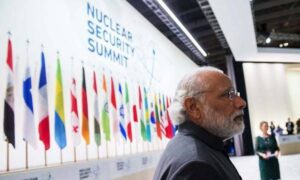 In his testimony to the US Congress on 8 September 2016, Carnegie Endowment for Peace’s Toby Dalton found the US administration’s continuous support for an “unconditional and exceptional NSG membership path for India problematic.” While the “policy [failed to] bring India’s nuclear weapons practices in line with other nuclear states;” it also does not “incentivize [Pakistan] to consider nuclear restraints.” Denied nuclear legitimacy and recognition, Pakistan keeps protesting against such discrimination.

Despite India receiving a temporary membership to the NSG in 2008, following its nuclear deal with the US, the plenary meetings in Seoul (June 2016) and Vienna have turned out to be a set-​back for India. At least 12 countries – including China, Turkey, Kazakhstan, Belarus, Italy, Ireland, Switzerland, Austria, New Zealand, Belgium, Brazil and Russia – have objected to India’s full membership for not having acceded to the nuclear non-​proliferation treaty (NPT). Ironically, the NSG was formed, in the first place, as a response to India’s nuclear explosion of 1974, when India clandestinely siphoned-​off plutonium meant for peaceful purposes towards its weapon program. NSG members’ demand for a ‘criteria based approach,’ rather than granting preferential treatment to India based on its so-​called ‘nuclear like-​mindedness,’ seems to be a fully legitimate and rationale approach.

Pakistan, as a nuclear pariah, on the other hand, continues to face international isolation and opprobrium. While Pakistan links its signing of NPT and Comprehensive Nuclear Test-​Ban Treaty (CTBT) to India, Pakistan is also accused of singlehandedly blocking the Fissile Material Cut-​off Treaty (FMCT) at the Conference of Disarmament. Pakistan contends that since its nuclear program is solely based against Indian aggression, it would be willing to sign NPT and CTBT along with India. As for FMCT, which bans future fissile production, Pakistan proposes its wider scope to take into account existing stockpiles – considering them ready-​reserves for future weaponization.

While Pakistan has moved from the sordid chapter of Dr. A.Q. Khan’s proliferation, the world remains unnerved at Pakistan’s fastest-​growing nuclear weapon program. Despite Pakistan’s self-​imposed NPT-​related moratorium, besides practicing nuclear safeguards streamlined with global standards – which are even acknowledged by the United States and IAEA – the international community remains worried about nuclear weapons falling into the hands of radical Islamist groups. It is ironic that, despite finding India’s “nuclear security measures weaker than those of Pakistan,” Belfer Centre’s March 2016 report titled Preventing Nuclear Terrorism raised ‘low-​level’ concerns about “the possibilities of state collapse or extremist takeover” in Pakistan.

While India’s ‘nuclear responsibility’ is lauded, one must be mindful of India’s internal nuclear discrepancies too. India’s five ‘doctrinal shifts’ in its January 2003’s ‘nuclear principles and goals’ (a revision of 1998’s policy draft) signify its fluid and ambiguous stance: (1) Moving from finite deterrent posture (minimum deterrence) to credible minimum deterrence – a flexible doctrine that can easily lead to arms race behaviour (for ‘minimum’ can never be quantified in front of enemy’s horizontal and vertical nuclear development); (2) Induction of ‘caveats’ to its no-​first-​use policy; (3) Use of nuclear weapons in response to biological and chemical weapons attack; (4) Nuclear retaliation not only against a territorial attack but also against threat to Indian forces anywhere in the world. This amounts to lowering the nuclear threshold to protect its forces employed under the Cold-​Start Doctrine (CSD), which entails proactive operations, limited war, or surgical strikes (a dangerous policy which can spin out of control with hazardous effects); and finally (5) Legitimizing a pre-​emptive doctrine – simulating Israel’s destruction of Iraq’s Osirak reactor in June 1981 and US invasion of Iraq in 2003 on false WMDs’ pretext.

In Inside Nuclear South Asia, nuclear expert Scott Sagan concludes: “It is deeply ironic that the Indian government has produced a doctrine that is both less defensive in character and less independent in origin – copying controversial innovations developed in the United States and other nuclear powers – in its effort to be a more ‘responsible nuclear power’ and to add more ‘realism’ to Indian nuclear doctrine.”

Furthermore, while Pakistan’s actual nuclear control and its employment is ‘known’ to be in the hands of the military, India’s nuclear push-​button under politicians and scientists may lead to battlefield confusion due to the lack of faith by civilians in the Indian army. Sagan observes: “[India’s] strict civilian control [is] because of distrust of professional military officers due to their history of collaboration with colonial powers.” In such backdrop, bureaucratic turf-​wars between the army high command and India’s Defence Research and Development Organization (DRDO) cannot be ruled out. Indian army had been systematically peeled-​off the nuclear policy and program beginning 1990, following the Brasstacks exercises of 1986–87, when it was felt that the then Indian army chief, General Krishnaswami Sundarji had dragged India to war against Pakistan. Later, the Indian defence minister, George Fernandes, had to publicly reprimand his army chief, General S. Padmanabhan for speaking on the nuclear issue; In one of his cavalier outbursts during Indo-​Pakistan military standoff in 2001-​02 the general had stated on 11 January 2002: “If we have to go to war, jolly good … If we don’t we will still manage … Take it from me, we have enough [nuclear bombs].”

Moreover, the Indian army’s loses in counterinsurgency in Kashmir as well as against Naxalites in the eastern Red Corridor raise questions about its competence. Although rejected by the Myanmar government, India undertook a cross-​border attack against rebels in Myanmar on 10 June 2015. Yet militants were said to have abandoned their hideouts long before the attack. Similarly, the much-​trumpeted ‘surgical strike’ against Kashmiri infiltrators in Pakistan’s Azad Kashmir on 29 September 2016 was dismissed by Pakistan’s military. Highlighting internal mudslinging, corruption, and incompetence, The Economist has recently laid-​bare the appalling state of “scandal-​prone” Indian armed forces.

International criticism on Pakistan’s fast-​paced nuclear weapon production and delivery system often overlooks not only India’s own unstable nuclear activities – amid its aggressive regional posturing – but also fails to take into account the ‘stability/​instability paradox’ in South Asia. Simply put, nuclear parity causes an ‘itch’ to carry-​out conventional or sub-​conventional warfare under the nuclear threshold. South Asia has yet to achieve strategic stability; Pakistan’s lack of a (sea-​launched) second-​strike capability compels it to launch a massive punitive response in the face of Indian aggression instead of a ‘demonstration shot’ or ‘gradual use’ of nuclear weapons. In such a scenario, even if a few weapons are neutralized by Indian pre-​emptive strikes or countered by India’s Ballistic Missile Defence shield, a sizeable barrage would still cause irreparable and unacceptable harm to the adversary. The use of MIRV technology (or multiple independently targetable re-​entry vehicles) is therefore Pakistan’s – and India’s – next logical stage.

While Pakistan voluntarily adheres to the guiding principles of Missile Technology Control Régime (MTCR), a 35-​member group of countries controlling export and transfer of technology in the field of ballistic missiles and unmanned aerial vehicles, it could not forward its candidature for membership due to little international support and the absence of China – its biggest benefactor – in the group. Despite India joining the MTCR in June 2016, the régime could have benefited from Pakistan’s inclusion (given its indigenization in solid and liquid fuel missile technology).

Pakistan, needs to be credited for (1) Establishing a well-​structured command and control system; (2) Setting-​up a rigorous regulatory régime covering all nuclear security and safety matters including physical protection of materials and facilities; (3) Instituting a comprehensive export control régime and; (4) Carrying-​out international cooperation (consistent with its national interests) as well as adhering to international obligations and protocols. However, denying Pakistan nuclear legitimacy and recognition, including NSG membership, to Indian predilection would not only perpetuate an arms race but also endanger the region.

In war, it is said, no one is right; only the one who is left. Not so in a nuclear conflagration. It is incumbent upon the international community to stop both India and Pakistan from teaching each other a terrible lesson – but in turn becoming inhabitable too.

Adnan Qaiser is a political and defence analyst having had a distinguished career in the armed forces as well as in international diplomacy and public and social sector development. He can be reached at: a.qaiser1@yahoo.com. (Image courtesy of AFP.)